Intelligence, imagination and audacity: The beating heart of U+I

Richard Upton explains how U+I is able to find value in creativity and how our office reflects the ideals that drive our regeneration projects.

At U+I, we believe in creating distinctive places. It’s why we exist as a developer; to unlock sites bristling with potential and transform them into inspiring places where people can thrive. Creating our home in Victoria two years ago was a chance to practice what we preach.

I recently hosted a tour of our offices with Estates Gazette. I always enjoy showing people around our offices, partly because they still walk in with a look of wonder two years on, but mainly because every part of the building is so expressive of everything we aim to be as a company. Our core values - intelligence, imagination and audacity - are reflected in the space we’ve created here.

A former post office depot turned art auction warehouse, 7A Howick Place was a vast industrial space with deep floorplates across two storeys but little natural light. Not the most obvious office space for a growing property developer, but we saw its potential.

Transforming the gloomy warehouse space we acquired into U+I’s beating heart required great imagination. So we gave our architects, AB Rogers and Phil Coffey, a unique brief – a video tape of Charlie and the Chocolate Factory. The story captures so much of what we set out to achieve with our offices. I particularly love the way the children’s faces light up as they first enter the factory. It’s a true expression of wonder, and of hope. After all, Willy Wonka’s factory is a place of opportunity. But it is also a place that takes the children on a journey towards maturity – and where those with the strongest values thrive. That’s what I hope we’ve been doing in our two years together as a united company.

Growing up doesn’t have to mean that life gets boring, though. The space we’ve created is meant to be full of surprises which delight at every turn. That’s why we filled our offices with art – whether that’s an original Francis Bacon piece or a commission by Morag Myerscough – and why we move that art episodically, so our people never stop seeing it out of habit. After all, if we want to continually strive to create imaginative, interesting places out of the sites we develop, then we can never let ourselves fall into routine or complacency.

We regularly host events in our large auditorium space, inviting others from within and outside the industry to talk and debate. This helps us to have our conceptions and expectations challenged at every turn. We also need to challenge ourselves every day to reinvent the way we think.

That’s where audacity also has a role to play. Our boardroom is suspended in a black box above the office, reminiscent of the scene in which poor old Mike Teavee becomes trapped in a television in Roald Dahl’s novel. We liked the idea of creating a role reversal with this space, playfully shrinking our directors down to size and using the large windows to highlight our commitment to transparency. The word ‘audacity’ can also be found in our “elevator pitch”, a lift that quite literally tells the story of U+I as visitors ascend to the first floor. 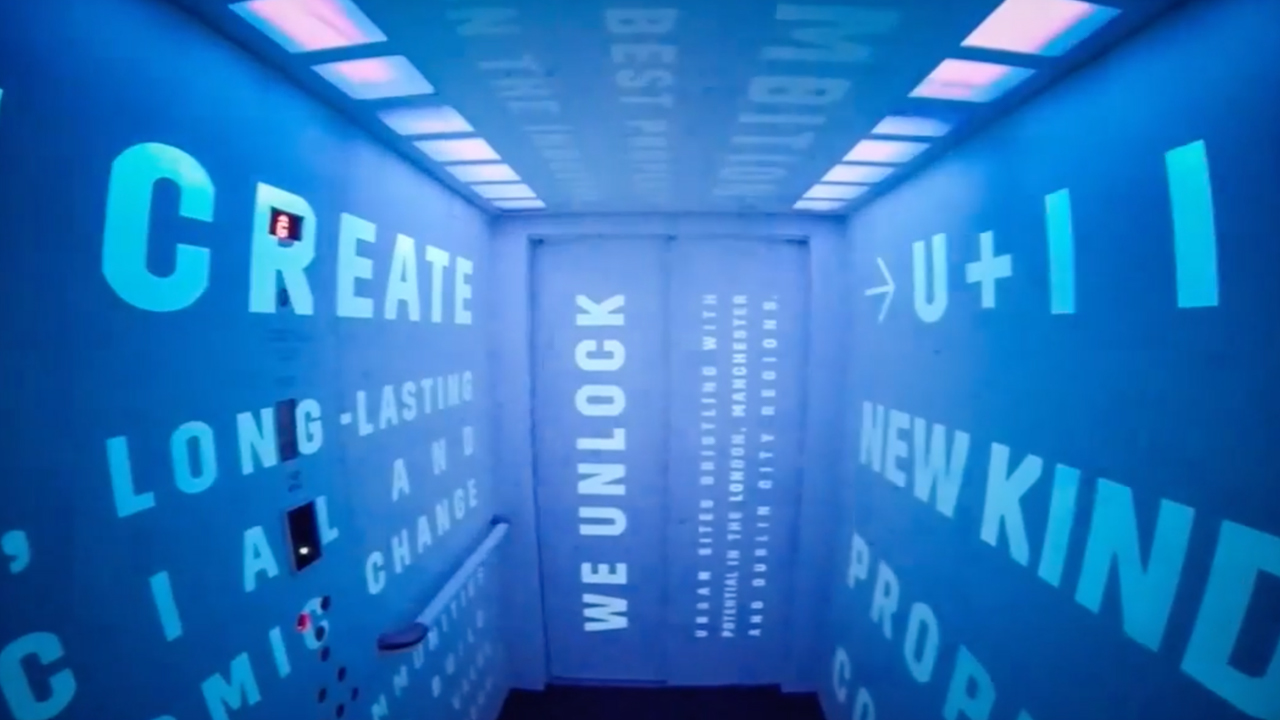 Quirks aside, we hope that 7A Howick Place tells our story and gives visitors a real sense of who we are. We want to be known by the places we create; our office is an example of what we can achieve when we put our values into action.